Way back in 2004 or so, while playing with this newfangled thing called ‘making a webpage’, I put together a wee photo list of all the surviving police boxes on Glasgow’s streets (I like lists; I’ve got one of those brains).

[Aside: I also like lists you can complete, which was a bit of a mistake when I tried to do the same thing with Scotland’s cinemas, which at 1,140 and still counting is definitely another story…]

It seems that this old page quickly became the top hit when you google ‘Glasgow Police Boxes‘, and I started getting asked questions, and treated like some kind of police box expert – which of course I was, but only because I was a life-long Doctor Who fan that lived in Glasgow; you kind of get used to police box spotting…

Glasgow once had 323 boxes; by 1994 there were still ten remaining on the streets.
In 2008, there were four. Of those, all but one were listed buildings, giving them some protection from demolition or unsympathetic alteration. So when I got an email sometime in 2008 asking for my professional (!) opinion as to whether the remaining box should also get listed status, I was delighted to be able to contribute, and it was successfully listed.

All four main Glasgow boxes are now Category B listed buildings. Originally, Glasgow police boxes were painted pillar-box red, rather than police blue, because they were maintained by the Post Office. Sadly, all of the ones you can see on the street have succumed to creeping Dr Who-ism, and are now TARDIS-style blue… Ignore anything it tells you on Doctor Who, but the boxes were concrete, not wooden – only the right-hand door, the only one that opened, was made of wood.

Since the initial page was put up, three of the boxes (Byres Rd, Buchanan St and Cathedral) were converted into coffee kiosks (much like many of the uniquely-styled Edinburgh boxes). I know I like a bad pun better than most, but even I found the name of ‘Coppuchino‘ a bit much. All of these have since closed however; thankfully the external alterations were pretty minimal.

Anyway, a quick roundup of Glasgow’s TARDIS-style police boxes, as of May 2011…

This box is in good condition, but has been annoyingly repainted a few times over the years (once with polka-dots, later in an almost Dalek-like gold and black), and recently was covered in advertising bill-boards, which is a bit of a pain. When it’s not covered up, it looks great, and you can often see kids and tourists having their pictures taken next to it…

This box once stood on an island in the centre of the road, with rather nice cast iron railings surrounding the steps down to to some underground toilets. This was the last box on the street to retain its orignal red colour; in 2009 it was removed, refurbished, and repainted. The new internal illumination looked great at night, although the red sign on the telephone door looks very odd against a blue background!

In 2010, the whole street area was dug up and re-surfaced; as part of this, the underground toilets were (sadly) filled in, and the box itself was moved to the side of the street. Currently, the exterior of the box looks quite good, but some of the window panels are sadly smashed.

This box’s blue paint is peeling off, revealing its red-painted origins. Oddly, it’s without any form of lamp, but is otherwise in not bad nick.

This box looked quite good when it was in operation as a coffee kiosk, with a flashing light fitted into its lamp housing, which helped to draw attention to it. Since the kiosk closed however, the door in particular has stated to deteroriate quite quickly, and the condition of this box is perhaps the worst of all the four main boxes…

Glasgow’s Transport Museum in the Kelvin Hall had a red Police Box on display up until it closed last year. This box was in need of restoration, but still looked pretty good. Since the museum closed, the box has been in storage. The brand new, multi-million-pound transport museum is due to open in June this year, and it’ll be interesting to see if it includes the police box once again… 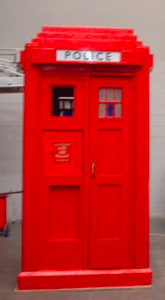 “Let me get this straight. A thing that looks like a police box, standing in a junkyard, it can move anywhere in time and space?”

This box, sitting in an industrial estate in the north of the city, is awaiting a new home – and is rather wonderfully camoflaged against the red background!

There were 10 boxes surviving in 1994; the whereabouts of all of them is unclear. 6 are accounted for above; Summerlee Museum also apparently has a box; and a number of Glasgow boxes have been shipped south to appear in museums and represent their southern progenitors (including one at the the Avoncroft Museum of Historic Buildings [originally from Maryhill!], and one at Kent Police Museum).

There’s a box at Grampian Transport Museum apparently as well…

Police Boxes map – great Google map showing where original and replica boxes can be found around the UK.

And don’t even get me started on the Edinburgh ones… 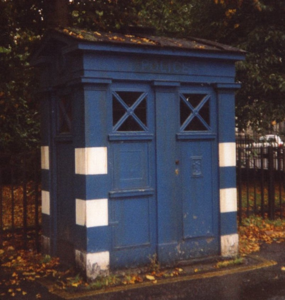